Our last Field Trial this season was a 16 Dog Novice A/V Spaniel held at The Cubley Estate by kind permission of Mr and Mrs David Legh and Headkeeper Shane Wood.

We attracted 53 entries for this Trial and having lost only 6 from the original draw, we started the day with a Full Card and lots of expectation as Shane had saved a piece of woodland for us which hadn't been shot for 10 days and fed every day just for us!

With Judges Mr M Clifford on the right and Mr K Lewis on the left the Trial started and it wasn't long before we were into Game.

It was fairly cold today so we were hopeful that birds would be seeking the shelter of the wood and they were but, as you would expect at the end of January, they were quite jumpy.

We ran out of wood just after starting the second round so Shane led the way to another wood a short walk away where we were able to finish the Trial.

With Sponsorship from Skinners, Sporting Saint, Tuffies Dog Beds, BASC and Acme Whistles the awards were made.

First, winning The Liz Bedford Trophy and The Woodmagic Trophy donated by Melissa Stubbs for The Gun's Choice was Kev Richardson with his Springer Bitch, Willowsaul Whirr.

(All CoM Dogs are Springers except Steve Newitt's Cocker Bitch)

A Special prize for the '"Keeper's Choice" donated by Mr and Mrs Legh was awarded to Adam Brown with Gemraer Don Dynamo.

This was a fabulous Trial to end a fabulous season and with 11 awards what more can we ask ??

Our thanks to everyone involved, especially "The Dove Valley Team"! 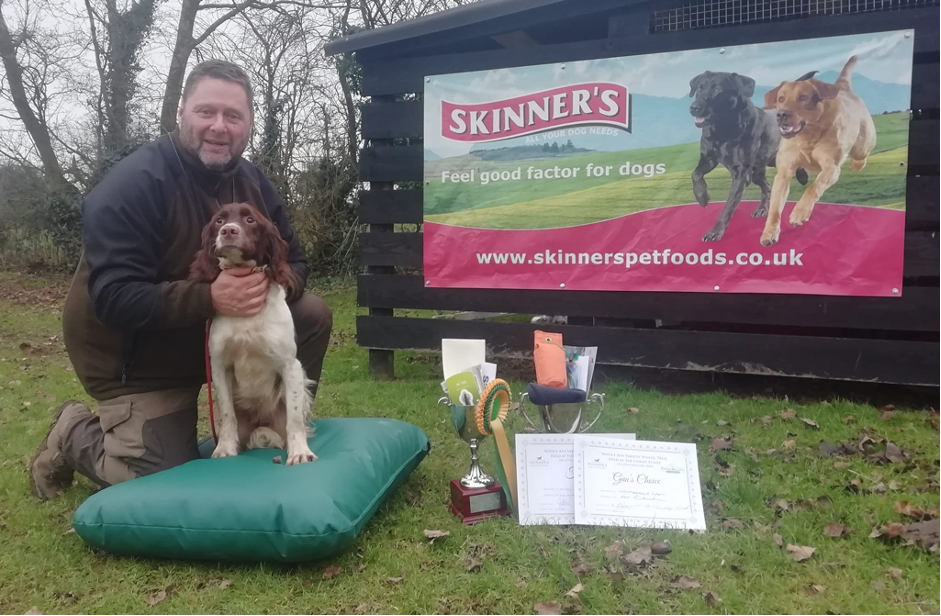